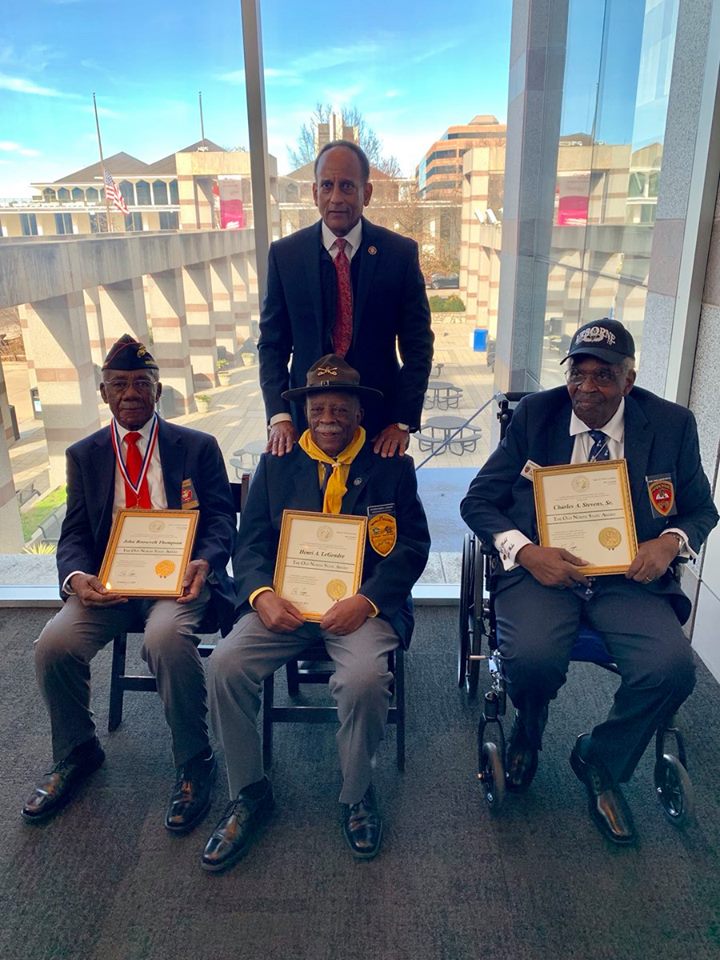 Raleigh — The NC Department of Military and Veterans Affairs (NCDMVA) celebrated North Carolina African American Lineage Day on today, Wednesday, February 13th.  The event was held in commemoration of the many contributions of African Americans in the U.S. military.  The NC Museum of History, Elizabeth City State University (ECSU), the Sports Shop Radio, The Buffalo Soldiers of North Carolina, and the Carolina Small Business Development Fund in collaboration with the NCDMVA, held a ceremony to honor and salute five African American service members who broke color barriers when the U.S. military was segregated.  The five men highlighted were Corporal John R. Thompson from Greensboro and Gunnery Sgt. Robert L. Thomas of Durham, both members of the Montford Point Marines; Henri A. LeGendre of the 9th Calvary “Buffalo Soldiers” who currently resides in Alabama; Calvin Morrow from Greensboro of the U.S. Navy B-1 Band; and Charles Stevens of Fayetteville with the 555th “Triple Nickle” Battalion.

The day included the filming of a future documentary as well as a proclamation issued by Governor Cooper declaring February 13th as African American Veterans Lineage Day. In addition, each honoree was given the Old North State Award by NCDMVA Secretary Larry Hall for their life long service and commitment to this country. Following the ceremony, a panel discussion was held with the honorees, hosted by Erroll Reese and Kevin McClendon of the “The Sports Shop Radio Show.

NCDMVA Secretary Larry Hall stated, “We hope this event will establish a tradition of continuing to honor these brave men and their families who exemplified what it means to serve their country and to hold your head high in the face of adversity”. From this occasion, a documentary will be produced, which will showcase the significant role that African Americans played in our nation’s history and highlight the importance of these men in the U.S. military.

For more information about the event contact Ariel Aponte, Inter-Agency Coordinator ariel.aponte@milvets.nc.gov or 984.204.8333.

To learn more about the Department, contact Angella Dunston, Director of Communications Angella.Dunston@milvets.nc.gov or 984.204.8336.

About NCDMVA – The NC Department of Military and Veterans Affairs is a state agency with a vision to protect North Carolina’s military installations, work with the communities surrounding military bases, and assist military families and veterans with obtaining the support and services they need.

Email correspondence to and from this address may be subject to the North Carolina Public Records Law and may be disclosed to third parties by an authorized state official.